WOW. I haven't blogged in awhile. Weather has been crazy blizzard like lately so I've been staying in a lot. Snow days are kind of fun every once in awhile but we've had so many I will have to come back to school even after I've officially graduated! I don't like that idea but we have gone way over our allowed snow days. 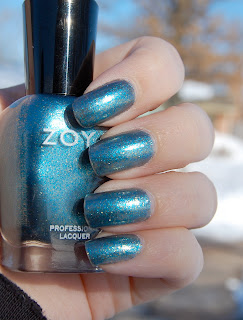 I got my Zoya 3 free order in about a 2 weeks ago (minus Zoya Kelly, which was backordered). Zoya Crystal seemed like the perfect icy blue to wear during this cold weather. It went on kind of sheer at first but built up nicely in only 2 coats. The colour is beautiful and has gold flakes in it. It looks really glittery but isn't gritty at all. My pictures don't really show how pretty it is, I had to take them quickly before my fingers froze off. I had never tried Zoya before and I'm impressed so far. The brushes are really nice and easy to use and I haven't had any chipping after a week. 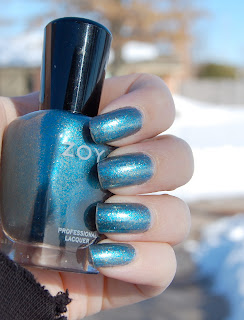 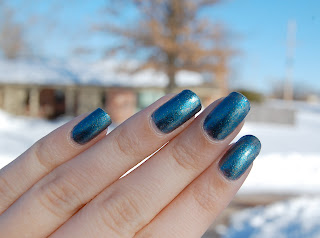 I don't know about the rest of you but we have lots of snow! My boyfriend actually ventured out in the snow and it took him 2 hours to get to my house. (It normally takes 5-10 minutes.) One of those hours was spent shoveling his car out of the apartment parking lot. His car ended up getting stuck right in front of our house. My dad helped him get unstuck. 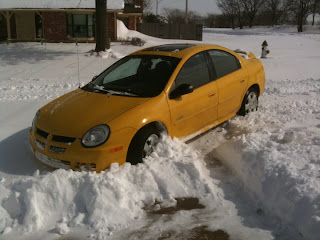