Today was my first day of school and things went pretty well. I can't believe it's my senior year! I had to cut my nails shorter since I'm in the school orchestra and its impossible to play the violin well with long nails. I was a bit sad at first but I think they still look good. I know this sounds weird but I keep them a little longer on my right hand because I can grip the violin bow better that way. But my left hand has to be short so I can press down on the strings and use vibrato. Anyway, I painted my nails with a polish I bought at Rite Aid before I even started this blog. It's by a brand called Scherer and they call their polishes 'Chameleon'. They all have a pretty strong duochrome, colour changing effect, almost similar to mood rings. This one is called Scherer Chameleon Blue Sky. The name doesn't really fit because blue isn't really the dominant colour in this and it shows up more in the bottle than on the nail. 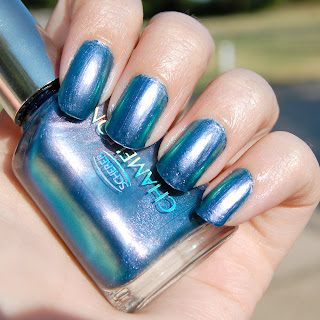 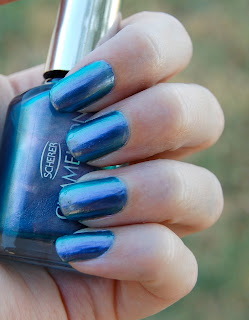 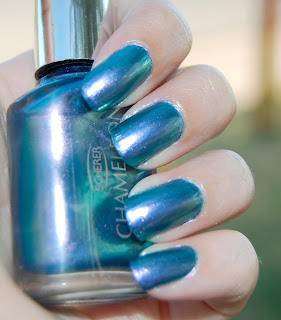 The application on this polish was horrible...it dried so quickly that it was difficult to apply cleanly and it streaked. I got it to look decent once I figured out how to work the formula. I also encountered bubbling and major brush strokes. The brush didn't fan out very well either, which also contributed to the brush strokes. Despite all the issues I still think its pretty and an interesting polish. It is also fairly cheap so if you really like colours like this and can deal with the formula this is a fun polish to wear. From far away you don't notice the imperfections so much. The colour changing effect is just as noticeable indoors as it is outdoors. I found these at Rite Aid and I believe they were 2 or 3 dollars. I have a few more of these I might try out...I hope the formula on the others is a bit easier to work with but I'm not expecting much. 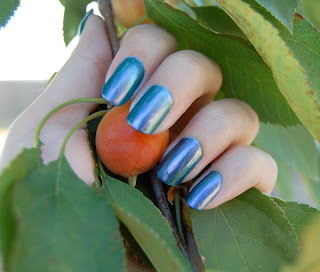 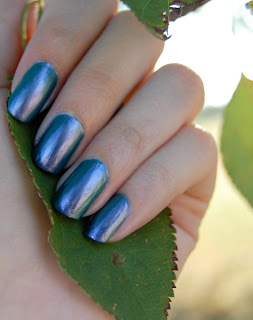 The last two pictures I'm holding my crab apple tree that is in my front yard. I heard from one of my neighbors (who has lived in my neighborhood for a long time) that this tree has been there as long as she could remember. I've never eaten one of the crab apples but one of my friends did a while ago and told me they were sour. This tree blooms bright pink during spring, the petals almost resemble cherry blossoms.
What do you think of this Chameleon polish? Have you seen or tried these?
Peace and Love,
Serena
Posted by Serena at 8/11/2010 07:26:00 PM