I can't believe its March already! The weather is really nice today which is great for taking nail photos. I recently got Zoya Kelly in mail (it was backordered from the 3 free promotion) and I also bought China Glaze Lighthouse. I didn't know which colour to get from the Anchors Away collection so I had Chase choose. I was surprised  he chose Lighthouse since he normally hates yellow. He describes it as "the sun in a bottle". When  he saw Zoya Kelly he told me I should layer Lighthouse over it. I didn't have any other ideas of what I should do with my nails so I tried it. 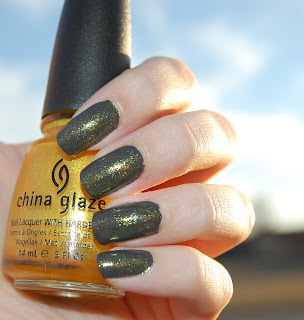 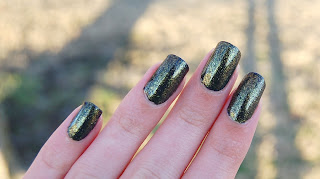 I was skeptical at first but I really like China Glaze Lighthouse. I don't think I would wear it on its on since its so sheer but I do like it for layering. I tried it over a turquoise colour on a nail wheel and it looked really pretty. It has a green-golden look to it when put on top of Zoya Kelly. I really like it.

I really want to wear Zoya Kelly on its own sometime. Its a gorgeous grey that leans slightly purple. It was almost a one coater. I might even do a Konad with this colour soon...it seems like it would work well for that.

On an unrelated note...I mentioned a long time ago that I got a 28 dollar nail file for Christmas. Since I mentioned it on here I want to a review for it soon. So tell me in the comments what you want to know about it...and what you look for in good nail file. I would appreciate your feedback so I can't write a good review. =)