The Japanese in the title means "Purple and Silver". I was going to post this yesterday but I got sick. I'm still not feeling 100% better but I wanted to get this posted before it chipped. I'm surprised at how well I did the Konad considering I feel terrible. My right hand is a disaster though! 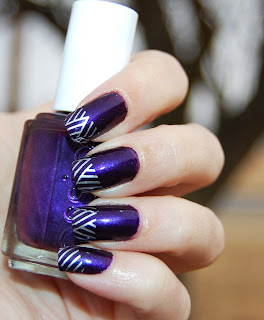 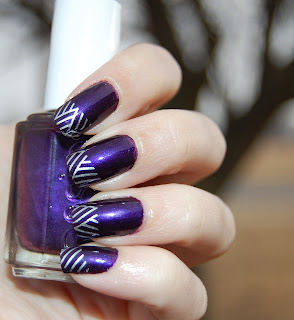 Sexy Divide is much prettier when there is actually some sunlight. My Walmart's Essie display was finally put up so I picked out three colours. (Sexy Divide, Beach Bum Blu, and Sew Pysched.) Chase, my boyfriend, bought these for me. =) I had never seen Beach Bum Blu before, it turns out its a Wal Mart exclusive shade. I know some people don't like the fact that Essie is now in Wal Mart but to me its a good thing. The only other Essie I have is Matte About You. The nearest place for me to purchase Essie is Ulta, which is about an hour away from me. The bottle is a little different so you can tell which ones are from Wal Mart. At my Wal Mart these were $7.25 each. I also heard somewhere that they changed some of the names, which I think is kind of silly. (Velvet Vouyeur, Velvet Voyage)