At the very least all topcoats should give your nails shine and help protect them from wear. A good, basic top coat should also last on nails. This one can't even do that. There are only two positive things I can say about this topcoat: It is inexpensive ($4.99 at Sally's) and it does dry quickly. Other than those two things this topcoat was a complete failure for me. After using up Sally Hansen Insta-Dri, I went to Sally's and picked up this topcoat to try out. When I first used it I wasn't extremely impressed, nor was I disappointed. It dried quickly, left a shiny finish and wasn't too thick. I did notice it was unusually thin and it didn't give as much of a glassy finish as most topcoats I'm used to. I figured I had probably just got used to that from using Seche Vite and Insta Dri so I continued to use it. One thing I noticed about this topcoat is it doesn't last. I painted my nails around noon one day and by 6:00 PM the shine was noticeably diminished. My nails also had that feeling like they didn't have topcoat on them. I painted another coat on that night. At that point I wondered if I would get even halfway through the bottle. 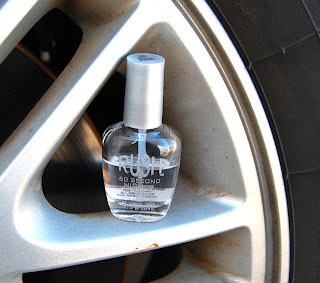 As far as nail art goes, the first few times I used it my design smeared so I always took blog pictures before I used topcoat. Back when I did my Breast Cancer Awareness manicure I started to become fed up. The polish I used in that manicure didn't dry shiny, it had more of a suede finish. (Not completely matte, but slightly.) I noticed the topcoat wearing off with this manicure the most. I painted it on and my nails looked shiny, then 5 hours later they looked dull again. After my Hidden Treasure manicure I decided to get a new topcoat. Flaky polishes usually aren't too gritty but they do have a texture to them. This topcoat did not smooth out that texture.

Pros: Dries quickly, inexpensive
Cons: Topcoat wears off really quickly, defeating the purpose of applying topcoat. Smears nail art. Doesn't give as glassy of a finish as I would like. Not recommended for glitters at all, it wouldn't even make Sally Hansen Hidden Treasure feel smooth.

Have you tried this topcoat? I'm wondering if anyone else has had a bad experience or if it's just me.

EDIT: Just added a box under followers where you can like my facebook page without having to go to facebook. It took me way longer than it should have to figure it out, the code kept messing up. It still doesn't look quite like I wanted it to but it serves its purpose. Plus I'm tired of messing with it.